Chances are, you’ll never face an active killer situation.  But if you do, you need to be prepared.

An active killer is an individual(s) actively engaged in killing or attempting to kill people in a confined space or other highly populated area. In most cases, active killers use firearms and display no pattern or method for selection of their victims. An active killer’s objective is that of mass murder.

Active killer situations are dynamic and evolve rapidly, demanding immediate response by the community and immediate deployment of law enforcement resources to stop the shooting and prevent further harm to the community.

What you do matters, and we encourage you to remember these three key steps: RUN, HIDE, and FIGHT.

If there is an accessible escape path, attempt to immediately evacuate the premises.

If evacuation is not possible, find a secure place to hide where the shooter is less likely to find you.

As a last resort — and only when your life is in imminent danger — attempt to disrupt and/or incapacitate the active shooter. 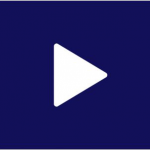 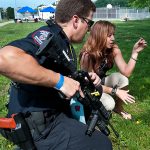 What to Expect from Responding Police Officers

Police officers responding to an active shooter are trained to proceed immediately to the area in which shots were last heard in order to stop the shooting as quickly as possible. The first responding officers may be in teams; they may be dressed in normal patrol uniforms, or they may be wearing external ballistic vests and Kevlar helmets or other tactical gear. The officers may be armed with rifles, shotguns or handguns. Expect to see different uniforms and/or plainclothes officers, as units might be deployed from different departments.

Do exactly as the officers instruct. The first responding officers will be focused on stopping the active shooter and creating a safe environment for medical assistance to be brought in to aid the injured.

The objectives of responding police officers are:

Officers will take command of the situation by shouting orders and/or physically directing individuals to a safe place or the ground. 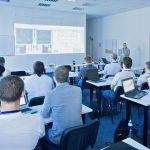