Officers at the UW–Madison Police Department use a variety of equipment to keep our campus community safe. This ranges from first aid equipment and AEDs, radios, pepper spray, K9s and horses, stop strips (used to stop vehicles in a pursuit), and even books and other comfort items to help calm our youngest community members in an emergency or crisis situation. 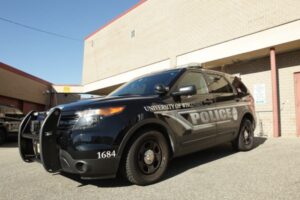 All officers are issued a rifle and have access to a less-lethal shotgun (bean bags rounds). On their duty belt, they carry a Glock firearm, pepper spray, a Taser, radio, surgical gloves, a baton, and handcuffs. Officers who work patrol also wear a body camera, which is activated and turned on when they respond to a call.

Read more about our body cameras »

UWPD has not sought or received any equipment from the federal government. However, in the interest of transparency, UWPD is sharing with our community the equipment that we own that is included in “prohibited” and “controlled” equipment lists, created by Executive Order 13688. Note: Executive Order 13688 was revoked on August 28, 2017 by President Trump.

Below are the complete prohibited and controlled equipment lists that the interagency Law Enforcement Equipment Working Group created; following each item is a notation in red, identifying if UWPD owns or has access to that equipment. If UWPD determines that it needs to own equipment on the prohibited and/or controlled lists (in addition to what is already owned), the department will seek input from the campus community.

Tracked armored vehicles: vehicles that provide ballistic protection to their occupants and utilize a tracked system instead of wheels for forward motion.
None

Weaponized aircraft, vessels, and vehicles of any kind: These items will be prohibited from purchase or transfer with weapons installed.
None

Firearms of .50‐caliber or higher
None

Ammunition of .50‐caliber or higher
None

Grenade launchers: firearm or firearm accessory designed to launch small explosive projectiles.
None. However, UWPD does own “launchers” specifically for dispersing crowd control chemical dispersants and less-lethal rounds, like foam munitions. The launchers could be capable of launching military explosive grenades. However, we do not possess those types of munitions and have no plans to do so in the future.

Bayonets: large knives designed to be attached to the muzzle of a rifle/shotgun/long gun for the purposes of hand‐to‐hand combat.
None

Camouflage uniforms: does not include woodland or desert patterns or solid color uniforms.
None

Manned aircraft, fixed wing: powered aircraft with a crew aboard, such as airplanes, that use a fixed wing for lift.
None

Manned aircraft, rotary wing: powered aircraft with a crew aboard, such as helicopters, that use a rotary wing for lift.
None

Unmanned aerial vehicles: a remotely piloted, powered aircraft without a crew aboard.
None

Armored vehicles, wheeled: any wheeled vehicle either purpose‐built or modified to provide ballistic protection to its occupants, such as a Mine‐Resistant Ambush Protected (MRAP) vehicle or an Armored Personnel Carrier. These vehicles are sometimes used by law enforcement personnel involved in dangerous operating conditions, including active shooter or similar high‐threat situations.  These vehicles often have weapon‐firing ports.
None. However, in the effort of full disclosure, nearby law enforcement agencies own armored vehicles, and by request, could bring those vehicles to UWPD’s jurisdiction to protect officers and civilians during rescue operations during an emergency response to an incident.

Tactical vehicles, wheeled: A vehicle purpose‐built to operate on‐ and off‐road in support of military operations, such as a HMMWV (“Humvee”), 2.5‐ton truck, 5‐ton truck, or a vehicle with a breaching or entry apparatus attached. These vehicles are sometimes used by law enforcement in rough terrain or inclement weather for search and rescue operations, as well as other law enforcement functions.
None

Command and control vehicles: any wheeled vehicle either purpose‐built or modified to facilitate the operational control and direction of public safety units responding to an incident. Command and Control vehicles provide a variety of capabilities to the incident Commander, including, but not limited to, the provision for enhanced communications and other situational awareness capabilities.
None. However, in the effort of full disclosure, nearby law enforcement agencies own command and control vehicles, and by request, could bring those vehicles to UWPD’s jurisdiction for use. These vehicles serve as a “hub” for a command post.

Breaching apparatus (e.g. battering ram or similar entry device):  tools designed to provide law enforcement rapid entry into a building or through a secured doorway. These tools may be mechanical in nature (a battering ram), ballistic (slugs), or explosive.
UWPD owns breaching kits for response to active shooter incidents. Each kit consists of:

Riot helmets: helmets designed to protect the wearer’s face and head from injury during melees from projectiles including rocks, bricks, liquids, etc. Riot helmets include a visor that protects the face.
Yes, UWPD owns riot helmets.

Riot shields: shields intended to protect wielders from their head to their knees in melees. Most are designed for the protection of the user from projectiles including rocks, bricks, and liquids. Some afford limited ballistic protection as well. Riot shields may also be used as an offensive weapon to push opponents.
Yes, UWPD owns riot shields.