Yellow Flag: Cautionary flag requires sailors to stay within the yellow line area which is an imaginary line running from the tip of Picnic Point to the red and white Oscar Meyer smoke stack.

No Flag: Lifesaving Station is not open. Lake is closed for Hoofer sailors.

First established in 1909, UWPD Lake Rescue & Safety provides a vital lake rescue service for UW-Madison students — and the greater Madison community — who frequent the waters of Lake Mendota. More than 100 years later, LR&S continues to provide a lake safety and rescue operation for boaters and swimmers.

For the latest lake conditions, flag color, forecast, and more — be sure to follow @UWHarvey on Twitter!

Lake Rescue & Safety hours of operation are designated to provide service to UW groups through approximate sunset and may change according to their schedule. Hoofer Sailing Club members and Outdoor UW renters are to return 15 minutes before the Lifesaving Station closes.

For Lake Mendota emergencies on days and times when the Lifesaving Station is closed, call 911. 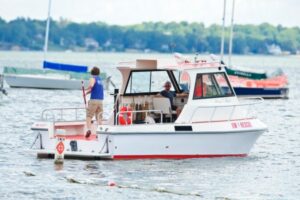 In April 1908, two UW students drowned in Lake Mendota when their canoe capsized off Picnic Point. One year later, UW President Van Hise — reacting to this and similar tragic stories — proposed a university-operated lifesaving station on Lake Mendota. Jo Steinauer, UW’s golf and swimming coach — assisted by a crew of volunteers — served from 1912 to 1914.

Thomas Isabell — a successful Great Lakes captain, shipowner, and salvage diver — came to Madison around 1914 to run the lifesaving service and assist the UW crew. His equipment was primitive by today’s standards. Key to the operation was the Cardinal, a 30-foot coaching launch for the UW Crew. Basically a pleasure boat, the Cardinal had a top speed of only 25 mph. Isabell became something of a media personality, frequently quoted in the paper when a reporter needed to know when the ice would leave the lake or how many canoes capsized during the last storm. Even though his work usually involved recovery rather than saving lives, Captain Isabell was regarded as a hero by UW students. 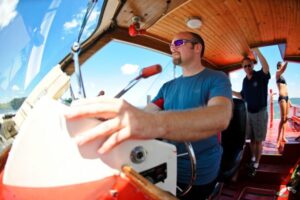 In 2018, the UW–Madison Police Department took over operations, and re-branded the unit “UWPD Lake Rescue & Safety.”

The rescue service keeps close ties with members of the Hoofer Sailing Club and canoeists from Outdoor Rentals, both located at the Memorial Union. The two groups have formulated a series of agreements to ensure safe boating practices among campus lake users.

Depending on the day’s weather and lake conditions, boat rentals and user restrictions may be imposed.  Hoofer sailors are required to pass a progressive rating system to sail under the day’s “flag” conditions as determined by the UW Lifesaving Station.  When severe weather is imminent, the UW Lifesaving Station activates a steam whistle and flashing red light system to warn boaters, and conducts a storm warning run around the lake.

We generally hire applicants with varying combinations of the following qualities/skills: