The UWPD K9 unit is comprised of three K9 teams — each has a specialty and can be seen at various times and events around the campus area. Two of the K9’s are explosive detection K9’s and are also trained in human tracking. Most commonly, the explosive detection K9’s can be seen providing security at large events on campus. Many times their noses are put to work hours prior to large events. They also respond to suspicious item calls, bomb threats, and can provide a variety of other services. Our third team, the narcotics K9 team, is most frequently utilized on traffic stops.

All of the K9’s are certified annually by the North American Police Work Dog Association and live with their handlers. The K9s love to interact with the community and play an important role in making the campus and surrounding community safe. Presentations involving the K9 unit can be set up by contacting one of the K9 handlers. 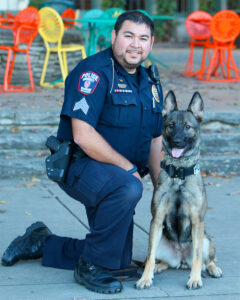 K9 Maya was purchased from Tarheel K9 Inc., Sanford, NC, in June of 2013. She is trained in explosive detection and human tracking. K9 Maya and her partner, Sgt. Nic Banuelos, are the newest addition to the UWPD K9 unit and have worked very hard over the past year to obtain all the certifications necessary to be on active service. Sgt. Banuelos says K9 Maya’s favorite activity outside of work is playing tag with her little sister, Ricochet. Maya loves to pick up all her toys and bones from around the house and stack them. She can also be found lounging in the sun on the back deck and occasionally she watches TV. 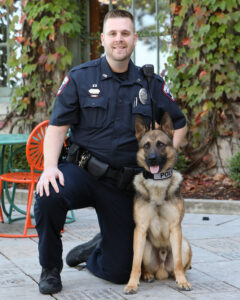 K9 Ritter, a German Shepherd/Belgian Malinois, was born in Holland in 2015. He was acquired by the UWPD in 2017 and is partnered with Officer Justin Zurbuchen. K9 Ritter received his initial training at Shallow Creek Kennels in Sharpsville, PA and is trained in explosive detection and human tracking. He is full of energy and loves working UW Badger football games on Saturdays in the fall. K9 Ritter also likes getting lots of attention at community events on campus and around the Madison area. When not at work, Ritter loves to go fishing — when not on the boat he enjoys relaxing at the house with his family. 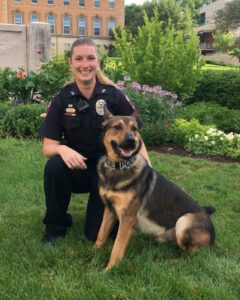 Officer Nicole Zautner and K9 Kobalt, a German Shepherd, have been partnered together since 2018 and are the department’s narcotics detection K9 team. K9 Kobalt was born and trained in Holland and traveled to the United States when he was 1 year old. Along with narcotics detection and evidence recovery, K9 Kobalt is also certified in human tracking. K9 Kobalt loves coming into work and is a very high-energy dog. When not on patrol or in training, K9 Kobalt comes home with his partner and gets to play with his big sister, a 12 lb Bishon named Kali. 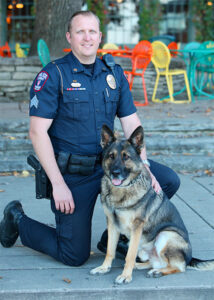 K9 Odin, a German Shepherd, was born in the Czech Republic in 2008. He was acquired by the UWPD in 2010 and is partnered with Lt. Brent Plisch. K9 Odin received his initial training at Tarheel K9 Inc., in Sanford, NC, and is trained in explosive detection and human tracking. He loved working large events and venues where he could run freely while working. K9 Odin was sometimes referred to as a “bull in a China shop” and took on several of his handler’s characteristics while working.

Odin passed away peacefully on October 3, 2017, following a short battle with cancer. He was surrounded by his family when he passed and received full honors from his UWPD family and first responders across the area. Odin was nine years old. 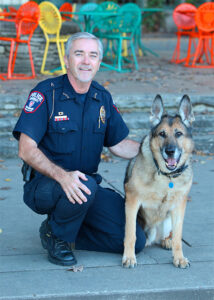 Rex born in April 2002, joining UWPD in October 2003 — our third K9 at the deparment. Rex and his handler Det. Shane Driscoll were a team for more than ten years — the longest serving team in the history of the UWPD K9 Unit — and both retired together in March of 2014.  Rex specialized in explosive detection and human tracking.  He and Det. Driscoll were responsible for protecting countless national and international dignitaries — including former and sitting presidents, First Ladies, politicians and political candidates, the Dalai Lama, and many others.

K9 Rex was very well known around UWPD for his unique personality. Rex had a kennel and bed in Det. Driscoll’s office, where he spent most of his day when not out on calls or assignments. His day typically started by making the rounds on both floors of UWPD, making a stop in only those offices where he knows a treat will be offered. During this routine, Rex would be totally focused on the objective of being rewarded for his social endeavors. When he got the chance, he’d sneak out and repeat the route to those offices where he knows he’ll be rewarded with a Milk-Bone. Another favorite thing for Rex was to sit at the water fountain until someone turns it on for him to slake his thirst. At home, Rex loved to play with his tug toy — and usually wins!

Rex passed away peacefully in Madison on Friday, February 6, 2015 after battling health complications. Rex was surrounded by his at-home family and members of his UWPD family. He was 12 years old. Rex was cremated and his remains were buried with full honors. 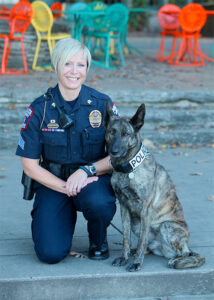 Lt. Cherise Caradine and K9 Casey, a Dutch Shepherd, were partnered together in 2007. K9 Casey was born, raised, and trained in Madison, WI. Along with narcotics detection and evidence recovery, K9 Casey was also certified in obedience and agility. She attained what is known as Level III tactical obedience, which involves obedience around gunfire and other highly stressful situations. K9 Casey and Lt. Caradine would have attempted level IV tactical obedience, but they needed a helicopter to jump from to achieve the title. Lt. Caradine affectionately refers to K9 Casey as “the number one dog in the state” — and Casey doesn’t let her K9 counterparts forget the self-given title.

After 10+ years of service to the campus community, K9 Casey retired from UWPD in June of 2017. Casey’s now just a regular ol’ (but very well trained!) dog at the Caradine household — but still regularly comes to work with Lt. Caradine! 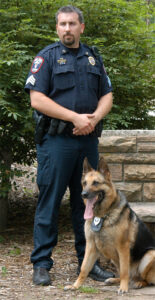 K9 Mosely was born in 2000 and trained in the Czech Republic — he became UWPD’s second K9 officer in May of 2002, and was partnered with Capt. Jason Whitney. Mosely specialized in explosive detection and tracking suspects, and was certified through the North American Police Work Dog Association (NAPWDA).  K9 Mosely was also selected for advanced training and certification by the ATF and FBI K9 programs.

K9 Mosely and Capt. Whitney were called upon to respond to a variety of calls for service, including bomb threats, suspicious packages, special events, tracking suspects, and community outreach. They also provided dignitary protection including visits by the Dalai Lama, President Clinton and President Obama, and were utilized statewide to assist other law enforcement agencies. K9 Mosely was the recipient of several Excellent Service Commendations from the UW–Madison Police Department.

K9 Mosely passed away in March of 2010 — he received full honors at his memorial in April 2010. K9 Mosely was laid to rest at Westport Pet Memorial in Waunakee, WI. Attending K9 Mosely’s memorial service was his handler Capt. Jason Whitney, his family, UW–Madison Police Department members, friends from the community, and representatives from police departments throughout the State of Wisconsin.